1. Simplicity can be very attractive.  In some ways, with my penchant for working with very complex elements, this may have been the most interesting thing I learned.  Perhaps the most important? 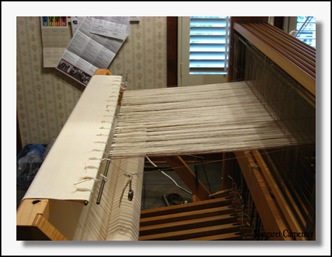 2. My calculations were on target for warp length.  I got six towels woven, with, as the photo to the left shows, only five to six more inches of possible weaving length.

On the other hand, I do not like to count on having to weave once the rod has passed over the back beam.  Once the rod starts coming off the back beam things can happen, especially unexpected broken ends.

Visible in the photo are the selvedge weights I use.  They are normally at the back.  But the position of the back rod puts them in that rather strange position.

3. I found that my body built up its ability to withstand continuous weaving.  That really surprised me.  After the first week it was showing signs of objecting.  But this second week I have felt as though I could weave all day with no problems.  Of course, I didn’t trust that feeling!

1. Size of Blocks.  The wide blocks on the outside are each 3/8” narrower than the other blocks.  As I had added additional treads to the brown stripes so they would end up the same size, so I should have added additional warp yarns to the outside blocks.  I had not realized (though I should have known) that the draw-in would extend so far in.  In fact, even the next block on either side is ever so slightly narrower than the remaining blocks.

2. Floating Selvedges.  Nearing the end of the warp, I noticed that the floating selvedge on the right side had unplied and was sitting there as two singles.  The only difference between the two sides that I could see was that quite a few heddles had slipped from the right side of the loom up snug against the threaded heddles.  Usually I watch that pretty carefully.  But this time, in the euphoria of weaving, I neglected to keep a watchful eye on those heddles.  In any case, I continued weaving and that selevedge yarn never broke.

3. Selvedges.  I had trouble with selvedges for about an inch or so near the end.  I thought it was that my bobbin winding had deteriorated.  Then it seemed that the weighted selvedge ends were not as taut as they usually are.  I looked a bit and couldn’t figure it out.  So I kept on weaving.  At some point the selvedges started looking fine.  I felt the selvedge warps and they were tight as a drum.  Clearly the weights had somehow rested just a bit on the beam as the rods were moving to the top of the beam.  I should have been more thorough in my checking.

3. Draw-in.  There were no general draw-in problems except that the draw-in on the first towel was a little less than on the remaining towels. The next four towels stayed the same width throughout the weaving. This suggests I need to spend time just weaving for awhile on the warp so that the draw-in stabilizes.

The only thing right now that I can think to attribute that to is the yarn I was using.  I had not used this natural color for weft before.  I noticed that it didn’t unwind smoothly.  At times the weft yarn stuck so much that I found myself pinching the selvedges with my fingers so the weft wouldn’t yank the warp in.  Perhaps somehow it was a bobbin-winding problem.  Yet I went through three full bobbins and surely I hadn’t made a muck of all three?

I think the yarn itself must have been rougher than the dyed (or bleached) yarns.  The solution then might have been to loosen up the tension on the bobbin.  Still, the stickiness seemed to begin with the thread coming off the bobbin, not through the shuttle itself.  So perhaps as I was nearing the end I grew careless in winding the pirns?

Hi Peg, one other thing I've noticed that may affect the weaving.

On a long warp, when the cloth beam gets built up with many layers of fabric, this can affect the tension on the web. Even though I may tighten to the same degree, I've found that I have to actually tighten the web slightly more in order to keep things the same as they were...

It's one reason why I love my AVL -tension is not held from the cloth storage roller to the fell, but from the sandpaper breast beam to the fell. Therefore no matter how many yards I've got stored on the cloth roller, the tension on the weaving is not affected.

I was reminded of this recently weaving the 11 meter placemat warps on the Fanny.

Thank you Peg for your detailed commentary.Although still very much a beginner weaver I read and re read your blog and think of it as a reference book. You give me a standard to follow as well as creative inspiration

I was delighted to read that you built up some stamina.

Ann Littlewood once told me that she thought it was the action of the shuttle on that one selvedge that actually untwisted that warp end. She would stop periodically and add some twist to that thread. My experience has confirmed this, so I keep an eye on that right floating selvedge, and stop and add some twist from time to time. Save breakage!

Laaura, thank you. I had not thought of many layers of fabric affecting the tension. Another piece of information for my mental toolkit!
Deborahbee. how do I thank you for this? I am most grateful.
Leigh, yes, I remember this. If i had had it on a separate bobbin I could have twisted it. In this case it was part of the warp so I couldn't. Unusual for me to do it this way but it was a matter of the design of the outside stripes. I'll try to remember this though! 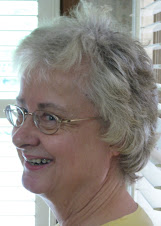